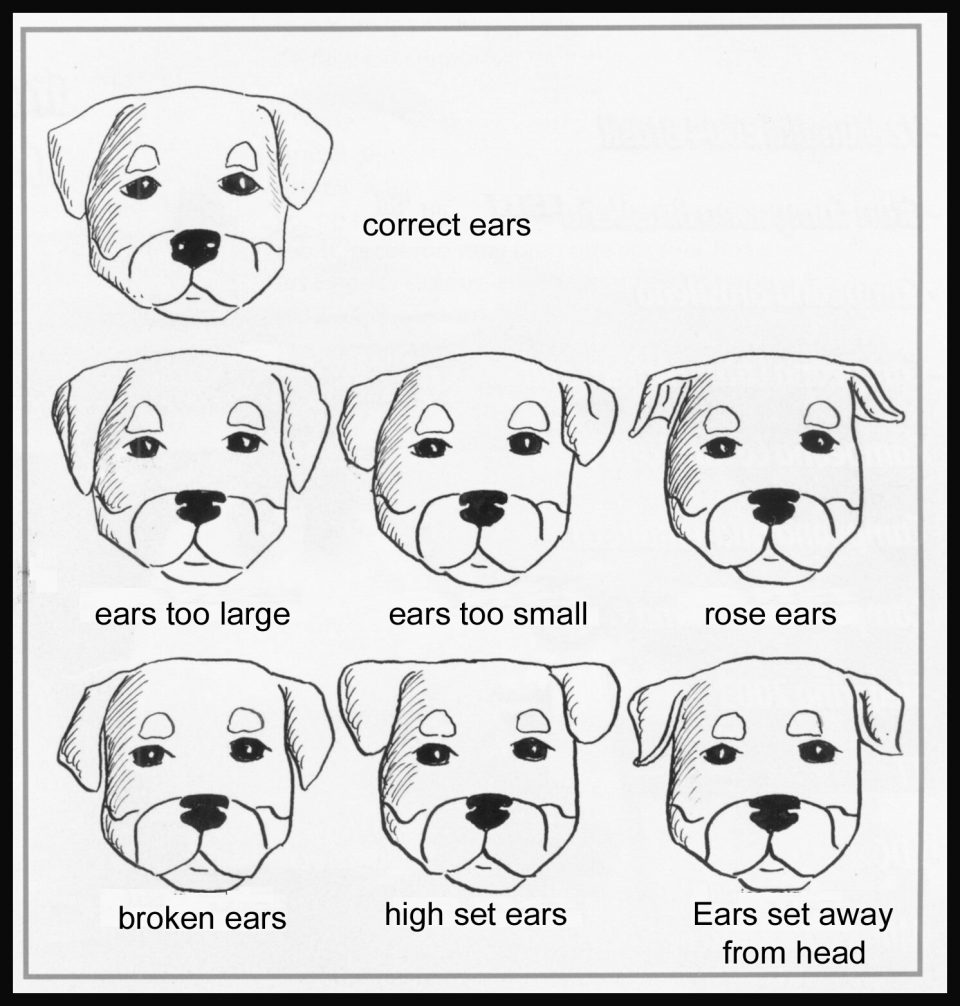 The Rottweiler is a very strong breed, muscularly very well-developed over a very robust structure, with a skull of medium length and wide between the ears; the forehead at a side view is substantial. The occipital protuberance is very well developed, and in order for the rest of the head to maintain physical harmony in conformation, it is necessary to have a good set of ears. Correctly set and carried ears, with the ears directed toward the front of the head, will compliment a well-shaped head.

“Die Rottweilerzhucht ist und bleibt Gebrauchschundzucht”, “The breeding of the Rottweiler is and continues to be the breeding of a working dog”. While it is true that we should commit and dedicate special attention to improve the working attributes of the breed, this does not exempt us from protecting those special details that are characteristic of the breed’s appearance. Believe it, that the ears can significantly affect the overall appearance of the Rottweiler.

Let’s see then what the standard tells us about the ears:

Date of publication of the standard: 06.04.2000 ADRK (Germany) Of medium size, hanging, triangular in shape, very separated in itself and planted high. With the ears very well set forward (in state of alertness) the area of the skull will seem wider. The ear finishes approximately middle of the cheek. In the correct position the interior border will rest firmly against the cheek.

Faults
Faults or defects in type are deviations from the characteristics described in the standard. They can change the overall image of the dog. The standard lists as faults: Too low, heavy, weak, bent towards the rear, or too separated. Some examples illustrated in young dogs show what is termed “rose ears” (see picture 1). It is a type of ear that exists and is desired in other breeds, such as the Bulldog. In our breed, IT IS NOT DESIRED. The “rose ear” in the Rottweiler, can fortunately be corrected, if we massage it and/or tape it early enough (see picture 3 & 4). With early taping, ears can usually be corrected in approximately 3 weeks to a typical set of Rottweiler ears (see picture 5). We must not forget that the ears play an important role in exemplifying and expressing breed type. This is precisely the reason to maintain good selection, through the breeding of lines with naturally correct ears. However, let us not become such perfectionists that we make the mistake of reducing our dog to a simple anatomical description. The beauty of a Rottweiler is greater than that. It is a being that should be accepted with all its faults, because, after all, “The perfect Rottweiler does not exist”.

The Rottweiler’s Eye by Yvonne Bekkers