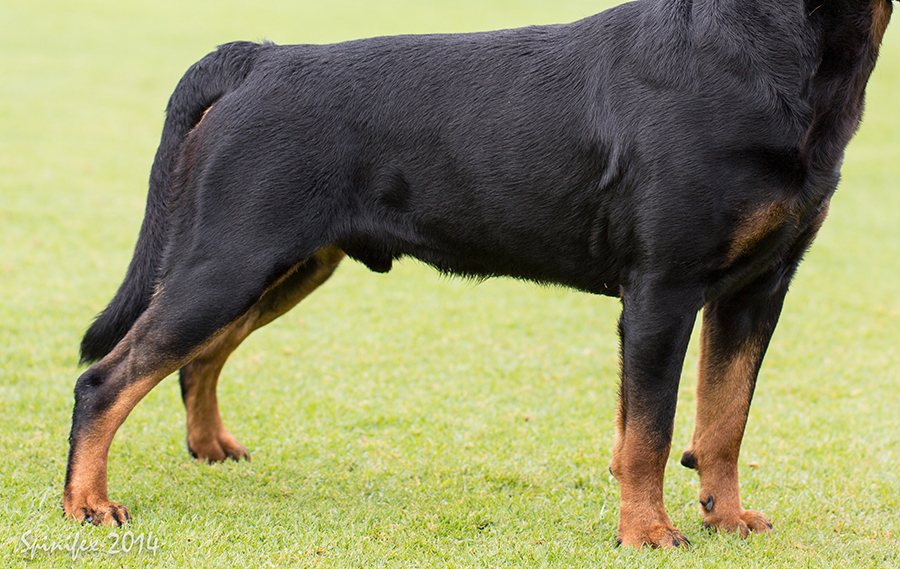 The meaning of structure
According to the dictionary, structure means the arrangements of formations of tissues, organs, or other parts of an organism.

Looking at a dog, you could say that every part of a dog is arranged in such a way that it can function. We have many different breeds and all of them are different in structure (build). Some are small, others are big. Some stand high on their legs, others stand low. Some are built for speed, others for endurance. In the old days, all the different structured dogs had their own task. No dog was kept “just” as a pet. There was simply no money or food to keep them in that way. Nowadays a dog is becoming more of a status or fashion item. For example, look at the celebrities with their Chihuahuas that they carry around in their high fashion purses.

History
For the Rottweiler, his purpose was very clear. He needed to herd the cattle and protect the belongings of his owner. In 1907, the German Rottweiler Club was founded, first as two separate clubs and then combined in 1921 into the ADRK as we know it today. They were the ones who originated the world (FCI) breed standard. In the years that followed, they made several changes, but the main purpose of our breed was still the same. (More information can be found in Adolf Pienkoss’s book The Rottweiler, a must have for all Rottweiler lovers.) The appearance of the Rottweiler has evolved over the years, but a good Rottweiler must still be able to WORK. The FCI breed standard of structure and temperament has not changed much in more than 100 years. When you look at pictures of Rottweilers from many years ago and look at a “normal” Rottweiler from the present, you can see that the breed has made a bit of a change in appearance, but not as great as in some other breeds (for example, the Bedlington Terrier or Bulldog).

Influence from humans
For a dog to be able to function normally, the dog needs several components:
–    Soundness: the firmness and power of muscle and bone. Under normal living circumstances, you cannot influence this much. Some dogs are built more sturdy or athletic than others are.
–    Balance and harmony: the way different parts work together in the body of the dog. A bad harmony will always show but you can correct it in some ways by training.
–    Temperament: you can influence this in many ways, both positive and negative.
–    Condition: you can clearly influence this as a human by training, feeding, living circumstances, etc.

Main parts of a dog
A dog consists of three major parts:
–    Front (head/neck and front legs/shoulder blades)
–    Middle (back and tail)
–    Rear (hind legs, including the pelvis)

The rear part acts as a motor that provides the drive of the dog. The tail helps to balance the dog when he is switching his point of gravity (balance). By this, I mean that if the dog is making a move to the side, the balance in his body changes.

The middle part conducts the drive from the hind legs into the front. It also acts like a shock absorber. The task of the back is often underestimated. That’s why I find it such an important part to judge. If the back is moving a lot during the running or walking, there is an imbalance somewhere in the body of the dog. Most of the time it has to do with the angulations (those are the most obvious to see). The front angulations are then different from those in the rear. Steep in front, well angulated in rear = imbalance. But there are many more factors that can cause imbalance in a dog, such as a short upper arm, being long in back, weak pasterns, and so on.

The front parts (legs and shoulder blades) act as shock absorbers and need to process the drive from the rear. It also needs to absorb the gravity and is the starting point of movement from the stand. The head/neck helps with switching the point of gravity and by making a sideways movement.

Movement
You can now see that the structure of a dog is very important. If one of the arrangements of formations is not efficiently constructed, you will see this in every part of the dog, especially on the move.

You need to know what is necessary for a dog to start moving. When a dog is standing naturally, the front legs stand straight under the body and the elbow joint is locked. A push in the forward direction against the elbow joint would land the dog on its nose. To get started, a dog first needs to unlock its elbow joint by lifting one of its front legs off the ground. At (almost) the same time, by a small motion from the rear, sometimes combined with stretching the neck, the gravity point of the dog goes forward. The body “falls” forward, the lifted front leg is put down on the ground, and the forward motion has started.

As a judge, I always look at the movement when a dog gets started and when a dog stops or switches gaits. Those are the moments where I can see a lot of the structure and fitness of a dog. Not only structure is important; the fitness (muscle, endurance and temperament) also has a big part in moving and stacking a dog.

Structure in the rear
The drive from the rear is guided most efficiently through the backbone when the hipbone (pelvis) is laying at a certain angle (30 degrees). The power of the drive is channeled most evenly and is (almost) all put into the motion.

When the hipbone is laying too steep, it means that the motion will be more inefficient. A part of the energy that is normally put into the forward motion is lost because a dog with a steep hipbone is moving more upwards with his rear than forward in comparison to a dog with an ideal laying hipbone.

When the hipbone is laying flat, this also means that the motion will be more inefficient. A part of the energy that is normally put into the forward motion is lost due to the fact that a dog with a flat hipbone is moving in a more falling motion. The front legs cannot keep up with the drive from the rear. These dogs lose a lot of energy trying to keep their balance.

Angulations in the rear are also an important part of the structure of a dog. According to the breed standard, a normally angulated Rottweiler needs a certain angle between the hipbone and the thigh bone, the thigh bone and the fibula (90 degrees), fibula and hock. When a dog is steep in its angulation, it means that the angles are bigger than the ideal. Dogs with a steep angle in the rear cannot show as much drive as a well angulated dog, as they take shorter steps.

Over angulation means that the angles between the different bones are smaller than that of a normally angulated dog. A normally angulated dog on the move shows the pad of the paw when its leg is lifted from the ground. An over angulated dog also shows (for a split second) the top of its paw (nails and fur). The paw does not stay on the ground long enough to fully make use of the drive, they finish their drive phase in the air before bringing the paw down again. This is what I call “kicking air.”

Sickle hocks
Dogs who are over angulated in the rear, and have a normal laying hipbone, show a constant bent hock, not only on the move but also in the stands. These dogs are also unable to fully exploit the drive in their movement. We call this sickle-hocked movement. When a dog with sickle hocks moves, we do not see the pads of the paw, but only the rear of the metatarsals.

Sometimes in very severe cases, the hocks are very stiff, making it almost impossible for these dogs to show normal movement. These dogs almost crawl over the ground with their hindquarters low and their neck and head higher than their hindquarters, because they are unable to push out their hocks and finish the pass, but still need to find their balance. In the German Shepherd Dog, this movement is quite normal because of the structure in their hindquarters.

Structure in the front
Angulations in the front are also an important part of the structure of a dog. According to the breed standard, a normally angulated Rottweiler needs a certain angle between the shoulder blade and the upper arm and the upper arm and the underarm (45 degrees). When a dog is steep in its angulation, it means that the angles are bigger than the ideal. Dogs with a steep angle in the front cannot show as much reach as a well angulated dog, as they take shorter steps.

Balance
If a dog shows incorrect structure (the “arrangements of formations” are not ideal), the dog is also out of balance. Balance is an important part of the structure of a dog. When a dog has an imbalance somewhere in the body, it means that the dog is not as efficient as he could be.

When you look at a picture, no matter the breed, and you have a bit of an eye for dogs, you can see if there is “something strange” about the dog. Maybe you cannot explain what you see exactly, but the lack of balance is clear.

Difference in balance (photos by Spinifex, cropped because I do not want recognizable dogs in this article). If you look at the pictures below, you see three males in the age range of 18 months. There is an obvious difference between them in structure (balance and build). All of them will move in the way that their body build lets them. You can spot the best-balanced dog yourself.

Conclusion
Structure is very important in a dog, especially in a dog that goes to shows or for a dog that is working. A dog who is working (IPO, Agility, Obedience, Flyball, etc.) and is not in balance has more risk for an injury. This is because to cope with this imbalance, the dog needs to compensate with other parts of its body and that is a loss of energy (muscle-traction, shock absorption in bone and limbs, etc.). No dog is perfect and every dog has it faults or imbalances. Some dogs have bigger issues in their balance than others. That can be the difference between a rating of Excellent, Very Good, Good, and Moderate. The sport of dog showing is to try to hide the imbalances from the judge. It is then up to the judge to try to find the imbalances and even more important to describe them. Then the judge can make the decision for the title! I love good handlers in the ring who know the faults of their dogs. I learn a lot from these handlers myself as well. But I can also appreciate the “newbie” who is just starting to show. If given the time, I like to explain to them how they can make their dog look even better. That’s the fun of our sport: helping and learning from each other.