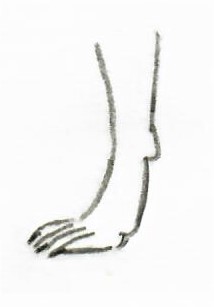 While marking my book, making notations, a handler quickly re-oriented the front legs of her dog. Instead of avoiding attention, it sparked my interest. “Can you move your dog up and back please?” She gaited her dog, up and back, then stopped in front of me without stacking. As I suspected, her Rottweiler was East-West.

Every breed has structural faults, which are undesirable and crucial to eliminate the integrity of its type. Some Standards are specific and categorize them on a faults list. In the Dobermann’s Standard, “the neck not to be too short, or too long, the back should not be sway back or roach back.” In the Boxer’s Standard, “French front, loose shoulders, loose elbows, weak pastern, hare foot, flat and splay feet.” The Rottweiler’s Standard too has its catalog of unwanted structure traits.

The topic of this article is “The 7 Deadly Structural Faults.”

Rottweilers possess a myriad of skeletal problems. Some are rare, others we see frequently. I present a list of the most common faults, which permeate the gene pool. Learn and know them well.

The FCI standard states “sturdy well-angulated hocks, not steep”. “Hocky” is a term with origins describing the hocks of a cow. The condition is common in that species. In the dog, it is an intermittent structural fault.

A. Fig. 1 Cow Hocks, depicts both hock joints turning in. It is an inherited trait. Exhibits
with this fault distract from the correct structural symmetry and lose rear drive—forward
push—and general inefficiency of gait. A dog who is hocky will often have knee joints that
turn out.

B. Fig. 2 Bow Hocks is the opposite of Cow Hock. Instead of the knee turning out, it turns
inward and rotates the hock outward. It too diminishes the efficiency of gait.

C. Sickle Hocks —Fig. 3—differs from the previous faults. Instead of the rear pastern standing perpendicular to the ground as Fig. 4, the rear pastern angles away from the hock joint. The shape it produces resembles a farmer’s sickle. The severity of the fault— mild to severe—depends on the angle. The cause of Sickle Hocks is a laxity in the muscle attached to the Achilles tendon.

Fig. 5. Occasionally, only one foot turns out, and the other foot’s orientation is correct. East-West feet is often accompanied by weak— “soft”—pasterns.

The cause of East-West feet is multifaceted. When the front assembly Fig 6—shoulders, angulation, rib cage, sternum, elbows, upper and lower arm, feet—are not in balance, the feet turn out. The structural problem is the sternum. The Standard requires it to be well pronounced. When it is not, feet problems follow.Fig. 8 Fig. 9

The Standard states, “front feet, round, tight and well arched.” Correct feet are like the feet of a cat—well-arched, round with no space between the toes. Fig. 8. Splay feet—Fig. 9—are the opposite. They are long, poorly arched and have space between the toes. The feet play a pivotal role as the body’s shock absorbers, influence endurance while trotting and initiate forward thrust. Splay feet impede gait.

From the Standard, “the slope of the shoulder blade is about 45 degrees to the horizontal. Shoulders: well laid back.”

5. Straight Stifles
From the Standard, “When standing free, obtuse angles are formed between the dog`s upper thigh and the hip bone, the upper thigh, and the lower thigh and the metatarsal.” Obtuse implies the upper thigh should connect to the lower thigh—the knee/stifle joint—at an optimal angle of 120°. When the rear assembly is mechanically correct, it functions like a coiled spring with the proper tension, ready to adjust and flex Fig.12. Straight Stifles are knee joints that have exceedingly high angulation—over the optimal 120°—with little to no turn of the knee/stifle joint. With this fault, the rear assembly functions like an uncoiled spring and cannot flex or adjust Fig 13. Straight Stifles hinder rear drive. A Rottweiler that possesses them cannot adequately push from the rear and is a cause for early fatigue.

The Standard states, “Pasterns: slightly springy, strong, not steep.” Soft pasterns—Fig 13—are the
opposite. The muscles and tendons of the pasterns are lax and cannot absorb the shock of gait. This
condition impedes the lift provided by correct pasterns. Dogs possessing this fault experience early fatigue.
Rottweilers with “spongy pasterns” usually have poorly arched—”flat”—toes.

7. Out at the Elbows

The Standard specifies, “Upper arm: Close fitting to the body.” It does not specifically mention the elbows.
But “close fitting” requires the placement of the elbows hugging the ribcage. Correct placement of the elbows supports and stabilizes the forequarters—Fig 14. Out at the elbows—Fig.15—destabilizes the front assembly. When a Rottweiler is “out at the elbows” its elbows rotate East-West. The condition is most noticeable from a front perspective and in profile too. The degree of rotation depends on the severity of the fault. Sometimes, only one elbow is affected. Occasionally, dogs with this fault will demonstrate toes pointing inward or have “fiddle fronts”—a combination of East-West feet and Out at the Elbow. The fault is severe because it affects the stability of the dog’s side to side—lateral—movement and exerts great
stress on the elbow joint, which can cause bursitis and early arthritic joints.

All faults 1-7 are structural and alter the blueprint of the Standard in two ways. They unbalance the symmetry the Standard expresses and two, challenge the unrestricted harmonious powerful gait of the Rottweiler. What makes them deadly is:

1. Their 100% heritability factor.
2. The difficulty eliminating from a breeding program.
3. Their adverse effect on show ratings.

In all examples—except for weak pasterns where the pup was crated for a long while during the maturation stage—the dam, sire or granddam, grandsire had these traits and passed them in the pedigree.

Some breeders understood these faults but overlooked them, a few did not do their homework, and many are unaware of their irreconcilable consequences. Structural flaws 1-7 can take many generations to eliminate, especially insufficient angulation of the shoulder and turn of stifle. They stubbornly persist within the pedigree. The best solution is to avoid using sires or dams who possess them. Because these faults affect the dog’s gait and symmetry negatively, no dedicated, accountable judge should award a show entry with “V” who demonstrate them. It would be absurd!

Other physical anomalies are uncommon but worth mentioning: (1) toes that turn inward, (2) feet turning inward, (3) extreme turn of the stifle, (4) curve neck, (5) giraffe neck and (6) extreme slope of the croup.